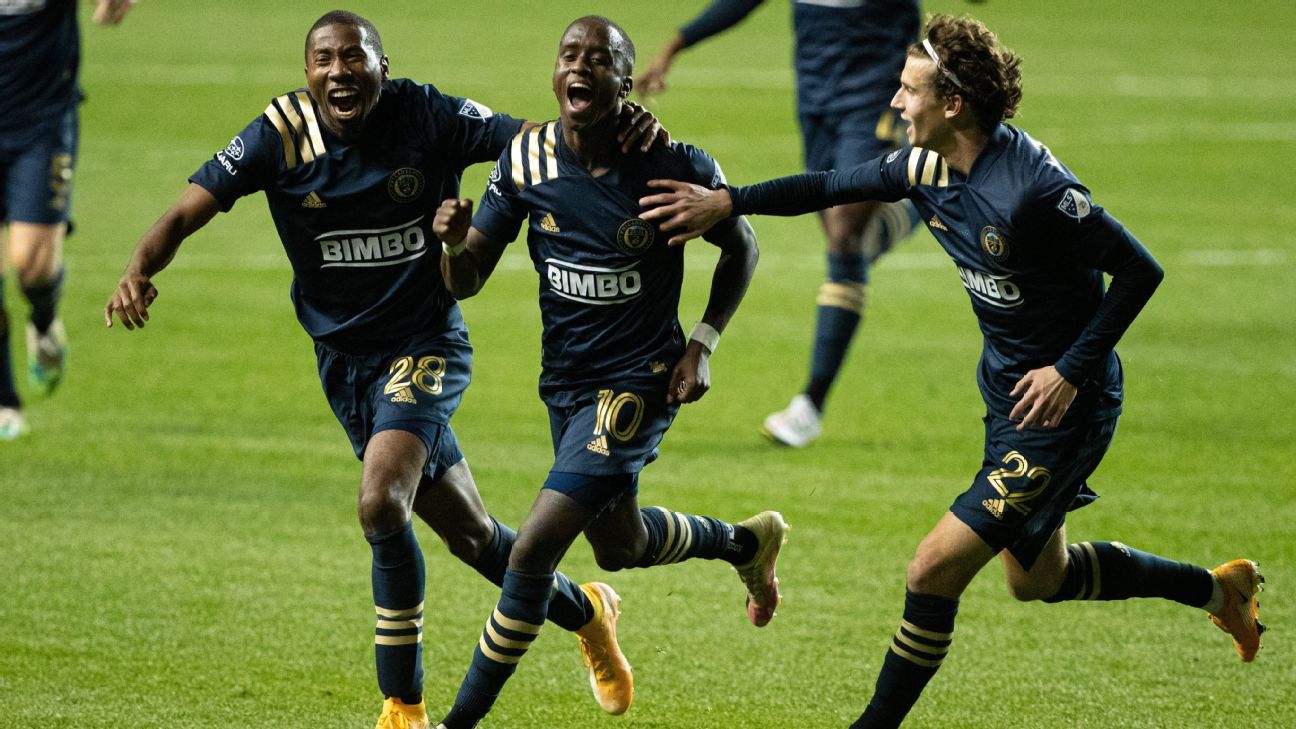 It was another dazzling, fun-filled week in Major League Soccer as the cream of the crop continued to separate itself in the final weeks before the playoff race. There were big, impressive wins for Philadelphia Union and Sporting Kansas City, some derby joy for LAFC against LA Galaxy on Sunday, and a rare win for Inter Miami CF as they temporarily halted Orlando City SC‘s rise in the Eastern Conference.

Jeff Carlisle recaps the weekend with a brand-new edition of MLS Power Rankings for all 26 clubs.

Saturday’s match against Toronto was precisely the kind of game which in the past the Union would’ve fallen flat. Not so this time, as Philadelphia — and hat-trick hero, Sergio Santos — produced one of the most dominating performances in its history, winning 5-0. The Supporters Shield is there for the taking. Can the Union close the deal?

Okay, so Pablo Piatti, Jozy Altidore and Chris Mavinga were among the bigger absences last weekend for TFC. That doesn’t fully explain getting hammered 5-0, even if it was by a very good Philadelphia side. It will be interesting to see how the Reds respond.

SKC’s form was a bit uneven following MLS is Back, but the month of October has seen Kansas City rise up the table and it now occupies first place in the West. Gadi Kinda has also proved to be quite the pickup, tallying his sixth goal of the season in a 4-0 win over Colorado.

Usually the Timbers would be pleased with a road draw at rivals Seattle. Except for the fact that Thursday’s 1-1 tie marked the second time in as many weeks that Portland coughed up a stoppage-time equalizer. Cleaning up its defending on set pieces is paramount for the Timbers down the stretch.

Will Bruin grabbed a precious point for Seattle at the death against Portland, but taking two points from the last three games has allowed Kansas City to leap over it in the West. At the risk of being repetitive, Raul Ruidiaz‘s return can’t come soon enough.

The Lions’ 12-game unbeaten streak came to an end at last with a defeat to Miami, but results have been a bit less consistent this month. Can new signing Alexander Alvarado give Orlando the attacking spark it needs?

A top-four finish — and a home playoff date — appears to be slipping away from the Revs following a loss to Philadelphia and a draw against Nashville in the past week. At least the return of Carles Gil from injury gives New England hope that it can begin climbing up the table again.

Even without a true center forward, the Blues managed to get the better of Montreal 3-1, and with Orlando scuffling their own playoff run-in, the Cityzens could yet climb up the table. Anton Tinnerholm continues to have a standout season for NYCFC and with Maxi Moralez getting back to his best, New York could yet cause problems in the postseason.

Could it be a case of perfect timing for LAFC? Diego Rossi, Brian Rodriguez and Carlos Vela are all back, and Vela even scored with a gorgeous chip in the 2-0 win over the Galaxy. The Black-and-Gold are hoping the November international window doesn’t disrupt things too much.

Granted, the Crew’s schedule has been road heavy of late, but such was their play earlier in the season that more is expected than one win in six. At least Darlington Nagbe and Lucas Zelarayan are back on the field.

Major League Soccer is on ESPN+. Seattle is the champion of the 26-team league, which added Nashville and Miami to the fold in 2020.
ESPN+: Live games and replays (U.S. only)
MLS home | Schedule | Standings

It wasn’t pretty — games against FC Cincinnati rarely are — but the Loons got a badly needed win thanks to Aaron Schoenfeld‘s late goal. A playoff spot seems a given, but the Loons look far removed from the team that looked so potent earlier in the campaign.

The Red Bulls have been grinding out enough points to be solidly within in the playoff places, and stoppage time was once again kind to RBNY thanks to the efforts of Brian White, who seems to have a knack for being in the right place at the right time.

It was nearly an epic week for NSC, but they had to settle for a 1-1 draw against New England after beating Dallas 3-0. An encouraging sign is that the team’s forwards have begun to come alive. Walker Zimmerman has been outstanding at both ends of the field as well.

After getting saved by the woodwork — and Jimmy Maurer — multiple times, FCD will gladly head back to Dallas with a point in tow. Taking a defensive posture against RSL after getting walloped by Nashville was probably the right move, but Dallas must get its offense back on track.

Saturday’s 2-1 defeat to Vancouver was an opportunity squandered as it kept the Whitecaps and Real Salt Lake within touching distance of the playoff race. At least Cristian Espinoza continues to be an assist machine. His 21 helpers are tied for third-most in MLS since the start of 2019.

After being idled for a month by a COVID-19 outbreak, the Rapids showed considerable rust in losing to Kansas City. They’ll have to regroup quickly with matches at Minnesota, home to Seattle and at Portland over the next 10 days.

The Fire isn’t out of the playoff race yet, but throwing away two points in stoppage time against the Red Bulls cuts deep. Not for the first time in the last few seasons, the component parts look decent enough, but it’s not paying off in results.

The ‘Caps dug deep to come back and beat San Jose, a result that keeps it inside the playoff places. Considering that its “home” matches are being played in Portland, manager Marc Dos Santos deserves some kudos for the job he’s done.

Manager Thierry Henry said he took the blame for the defeat to NYCFC after sending his players home to Montreal for some family time. But what’s really killing his team is the kind of backbreaking defensive errors that led to NYCFC’s opener.

Yes, that’s Miami currently hanging on to the 10th and final playoff spot in the East, and they did it against Orlando without the suspended Gonzalo Higuain. And no Atlanta, you can’t have Leandro Gonzalez Pirez back, especially after his stoppage-time winner.

If RSL fails to make the postseason, it will likely rue the home draw with Dallas, especially given the chances it squandered. Wednesday’s match at San Jose is shaping up to be a playoff place six-pointer.

Break up the Black-and-Red. That’s two road wins in a row following Saturday’s victory at Atlanta. The odds of making the playoffs are still slim but incredibly DCU is just three points back of the final playoff spot. Credit to interim manager Chad Ashton for picking the team up.

The Five Stripes are now 12th in the Eastern Conference and are playing just poorly enough to avoid victory. With a closing run that includes games at Orlando and away to Columbus, a playoff spot looks unlikely.

Memo Rodriguez continued his solid season for Houston with a goal against Columbus, but the Dynamo’s 1-1 tie did little to help its playoff prospects.

Yes, LAFC’s first goal was tainted. So it goes for the Galaxy. GM Dennis Te Kloese said his intention is for manager Guillermo Barros Schelotto to finish out the season. Given the way things are heading, it’s tough to see the Galaxy manager surviving much beyond that.

Last year, Cincinnati set a record for most goals conceded with 75. This year it might set a mark for averaging the fewest goals per game. At present, FCC has averaged 0.55 goals per game. The record belongs to the 2013 D.C. United squad that scored 0.65. FCC needs four more goals to avoid an ignominious mark.