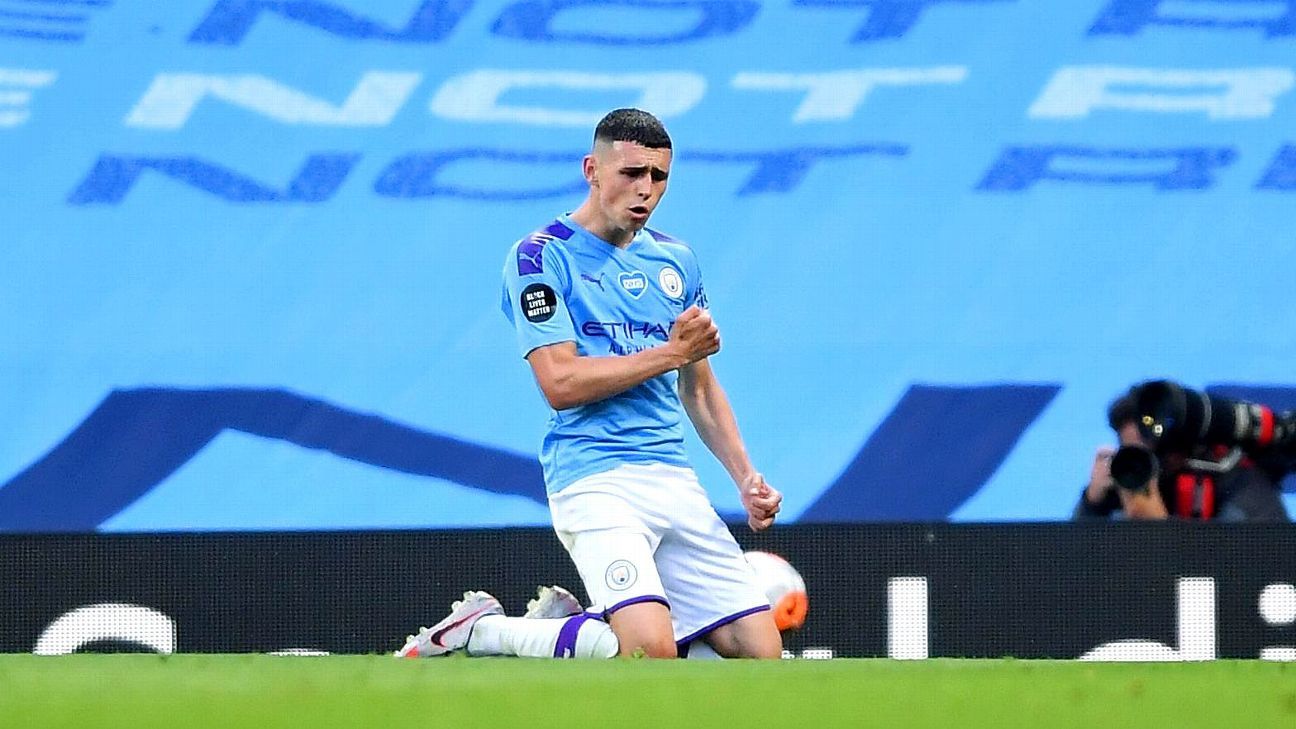 Manchester City took advantage of some absent Liverpool defending to beat the Premier League champions 4-0 at the Etihad on Thursday evening.

Kevin De Bruyne opened the scoring from the penalty spot after Raheem Sterling was bundled to the ground by Joe Gomez, before two goals in 10 minutes from Sterling and Phil Foden put Pep Guardiola’s side out of sight by half-time.

A layer of gloss was added to the scoreline in the 66th minute, when Liverpool substitute Alex Oxlade-Chamberlain turned a Sterling effort into his own net to round off a miserable night for Jurgen Klopp’s Reds.

– What did you miss? The latest from Europe’s top leagues
– Soccer is back! Stream ESPN FC Daily on ESPN+ (U.S. only)t

City overcame a sloppy opening 20 minutes to clinically take advantage of a string of Liverpool defensive errors, and a classy performance from Foden suggests the 20-year-old is benefitting from a sustained run in the side.

The Premier League runners-up struggled with Liverpool’s intense high-press in the opening quarter of the game. The defensive unit as a whole also lacked cohesion as they unsuccessfully looked to spring the offside track with a dangerously high line. We could well have been looking at a different scoreline if the visitors took a few of their chances.

Manager rating out of 10

7 — Guardiola faced a tough task to motivate a side that has been comfortably second-best all season, but his forward line proved too hot to handle for a Liverpool defence that was often caught cold.

Dan Thomas is joined by Craig Burley, Shaka Hislop and a host of other guests every day as football plots a path through the coronavirus crisis. Stream on ESPN+ (U.S. only).

GK Ederson, 7 — A good early save denied Mohamed Salah in the opening four minutes, before the keeper expertly rushed out of his area just after the half-hour mark to deny the Egyptian a clear run on goal.

DF Kyle Walker, 6 — Never in any direct trouble against Liverpool winger Sadio Mane, but the right-back did occasionally leave his centre-backs exposed when venturing slightly too far upfield. Booked for putting an arm in the back of Mane as the two contested a bouncing ball on the edge of the box, before being brought off for Joao Cancelo for the final 17 minutes.

DF Eric Garcia, 6 — Kept things simple as he looked to make the most of the chance given to him by Guardiola, and while he was comfortably beaten in a first-half foot race with Mane, the youngster stuck to his task and preserved his side’s clean sheet.

DF Aymeric Laporte, 6 — A sub-par performance from the Frenchman, who was guilty of some wayward passing, along with some poor positional play against the fluid Liverpool front three. Replaced by Nicolas Otamendi in the 78th minute.

DF Benjamin Mendy, 7 — Picked up one of the earliest time-wasting yellow cards of the season in the 42nd minute for taking too long over a throw in. That said, the Frenchman was excellent on the overlap, and Salah didn’t get a sniff against the World Cup winner.

MF Rodri, 7 — Arguably City’s best player in an opening 15 minutes that his side struggled to get a grip of. The Spaniard also had to be alert to root out some promising Liverpool counters before his side took control. Released De Bruyne with an excellent pass on the way to the fourth goal to cap off a decent performance.

MF Ilkay Gundogan, 6 — Not as efficient in possession as you would expect, with some loose passing in the first half, but the German recovered and found his zip as the game wore on.

MF Phil Foden, 8 — Laid the ball on a plate for Sterling to tuck away City’s second of the evening, before playing an excellent one-two with De Bruyne and then lifting the ball past Alisson to put his side 3-0 up before half-time. The England Under-21 international could well have added to his tally during a second half in which he oozed confidence.

MF Kevin de Bruyne, 7 — Stroked home a 25th-minute penalty to put his side ahead against the run of play, and the Belgian was constantly finding spaces in between the lines to cause problems for the visitors.

MF Raheem Sterling, 7 — Showed great strength to win City’s penalty as he held off Gomez and drew the foul from his England colleague. Delivered a smart finish in the 34th minute to put his side firmly in control of proceedings and later forced the own goal by Oxlade-Chamberlain to make it 4-0. Replaced by Bernardo Silva for the remaining 12 minutes.

FW Gabriel Jesus, 6 — Started brightly and looked to stretch the Liverpool backline with some darting runs in-behind, but was never able to squeeze out a meaningful chance despite receiving the ball in promising positions on more than one occasion. Replaced by Riyad Mahrez just before the hour-mark.

FW Riyad Mahrez, 6 — Combined well with De Bruyne to create a half-chance for the City skipper, before dragging a shot just wide in the final 15 minutes. Unfortunate to have a 94th-minute goal disallowed for handball in the build-up.

DF Joao Cancelo, N/R — Slotted in at right-back as City held firm in the final quarter of an hour.

DF Nicolas Otamendi, N/R — Had little to do in his brief cameo.

MF Bernardo Silva, N/R — Unable to create an opportunity in the final 10 minutes or so, but the game was won long before his introduction.