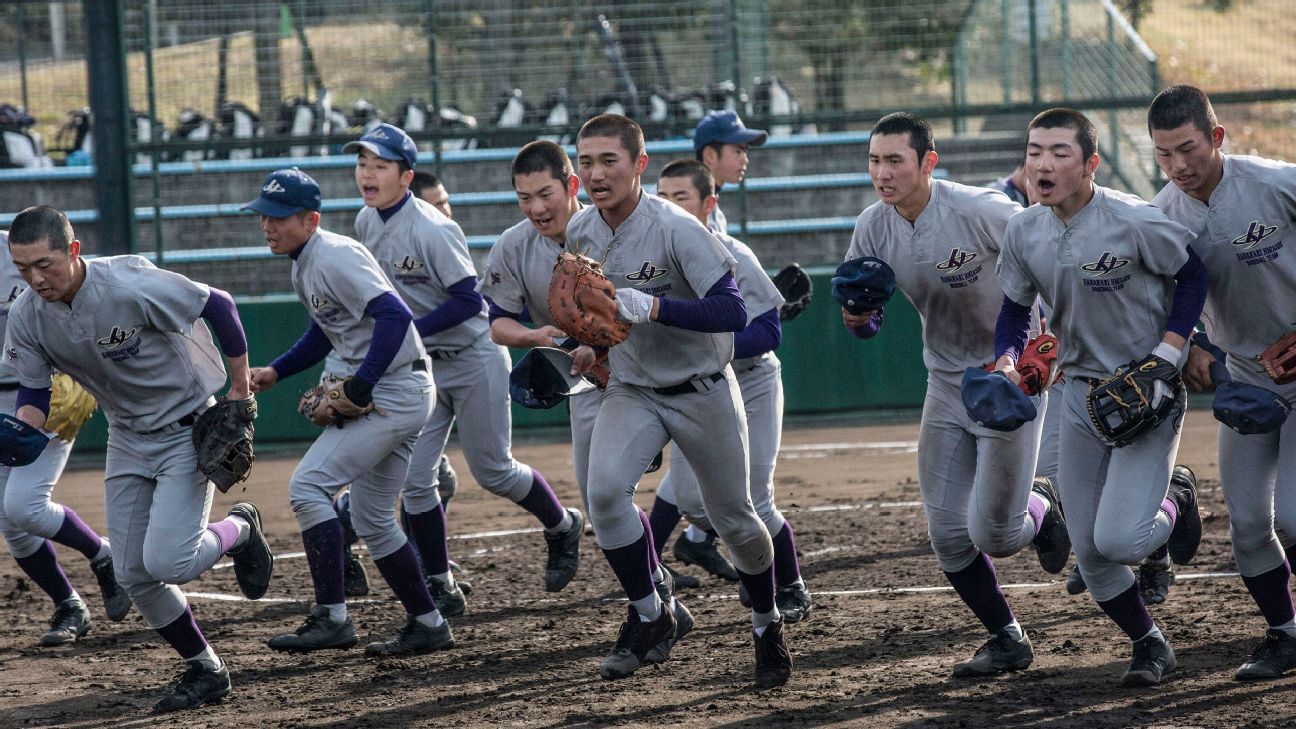 High school baseball in Japan is a noisy, communal, hyperkinetic affair. It starts right away, as coaches hit pregame infield practice with three baseballs going at once, one after another after another, and the constant collision of chatter resembles an aviary. It’s difficult to square this raucous spectacle with the perception of baseball in America, where detractors see a staid, inert sport incapable of capturing the attention of the terminally inattentive.

Every baseball field in Japan is considered sacred ground, and before each game the players gather in a ruler-straight line in front of their dugouts and bow to the earth to thank it for providing the canvas for their endeavor. It’s deep, and it’s portrayed in riveting detail in “Koshien: Japan’s Field of Dreams,” a documentary that premieres at 7 p.m. Monday on ESPN. It highlights a difficult truth: There is very little levity that comes with playing high school baseball at a high level in Japan; it is a task filled with regimented training and complete devotion, heavy responsibility and historical accountability.

Everyone has a job, and they play to serve each other. When a catcher ends the inning on the bases, three of his teammates sprint out of the dugout, two carrying one shin guard each and the third holding the chest protector, mitt and mask. They slap the gear on him like a pit crew, and when they’re finished the catcher runs to his position to the loud congratulations of everybody on the bench. They all cheer the pitcher as he loosens up between innings — every strike is rapturous — and they greet the teammate who warmed up the right fielder as if he’d conquered nations. The third-base coach, always a player because coaches are not allowed on the field, carries an aerosol can of freeze spray in his back pocket and runs to the plate every time one of his teammates fouls a ball off a body part.

On the field, every ballplayer is expected to uphold a century of tradition. It’s not hard to see how stress can build in these young men who are called upon to model the purity and promise of a country’s youth.

Hanamaki High School head coach Hiroshi Sasaki is one of the best coaches in his country, and he is one of the major characters in Ema Ryan Yamazaki’s documentary. The other is his mentor, Tetsuya Mizutani, the longtime coach of a high school in the Yokohama prefecture. In 2018, they both have the same goal, as captured in the documentary: lead their teams to the 100th summer Koshien, the countrywide, 49-team high school tournament that captures Japan’s imagination for two weeks every year. Out of its winners, the tournament creates national heroes for life, but it’s a merciless single-elimination format. Players on losing teams are given bags into which they scoop dirt from the Koshien infield as lifetime keepsakes. Most of them scoop their own tears along with the dirt.

The documentary follows the two teams through the eyes of their coaches and select players. Mizutani hovers over his squad like a brooding, obsessive boss, consumed with reaching Koshien for the first time since 2009. (Just to reach Koshien, his team must win the 200-team prefecture tournament.) His life feels devoid of everything but this quest, and his commitment to Japanese baseball tradition is unrelenting. “I want to remain a stubborn man of the 20th century,” he says, and his militaristic style reflects just that. He refuses to let a player practice until he has gained a certain amount of weight. His words flare and his eyes sear at players that fail to meet his expectations. And, in a twist that pulls the film in unexpected directions, he sends his promising son, Kosho, to play for Sasaki and Hanamaki High.

I met Sasaki while I was reporting a story on Shohei Ohtani, one of his former players. (Yusei Kikuchi is another.) If you’re looking for differences between our baseball culture and theirs, consider this: On the day we met, a brisk Saturday in late March, Hanamaki played a doubleheader. After they won both games, the players bowed to the fans to thank them for attending and immediately headed to a side field to practice for 90 more minutes. They were on the field for nearly eight hours.

Sasaki and I spoke by video call last week, and he was curious whether an American audience would be interested in the documentary, essentially a “Hard Knocks” style look at Japanese high school baseball. I told them I couldn’t predict the response, but I felt pretty sure Mizutani’s coaching tactics would be viewed unsympathetically. Sasaki winced, voiced his admiration for Mizutani and said, “As times change, things need to be adapted, sometimes gradually and sometimes quickly based on circumstances. There are a lot of things in Japanese high school baseball that are done based only on tradition and routine — how things have always been. It’s important to adjust that and move forward with the times.”

The contrast between Mizutani and Sasaki provides the documentary’s narrative tension. Sasaki is the future, questioning tradition and drawing from interests as disparate as corporate efficiency, American training techniques and nature. Despite a culture that routinely allows pitchers to throw 250 pitches on successive days, he removed a struggling Kikuchi from the Koshien championship game in 2009. (Kikuchi, it turned out, was pitching with a broken rib but still felt he betrayed his team.) Sasaki finds solace and balance in the garden he cultivates behind a chain-link fence along the right-field line of Hanamaki’s field, and he draws parallels between coaching young men and finding the right-sized pots to allow the plants to reach their full potential.

I confess to geeking out a bit when it comes to the cultural differences between Japanese and American baseball, but there just aren’t many coaches in the U.S. — especially high school coaches — who approach the game with Sasaki’s level of philosophical intuition. (Most high school coaches in the U.S., to be fair, are consumed with getting the infield mowed and the sprinklers to work.) When I spent a week in Japan in 2018 reporting on Ohtani, I was fascinated by the idea that a pitcher who fails to cover the bag on a ground ball to first — even when the first baseman has an easy jog to the base — is committing not just a mistake but an act of selfishness, because each player exists to make life easier for a teammate. Similarly, a third baseman who attempts to make a showy play on a roller down the line, rather than letting it trickle foul, is not only grandstanding but insulting his teammates. When I was in Japan, Ohtani was going through his first big league spring training. He couldn’t throw strikes, he couldn’t hit, and the Angels had relegated him to pitching against minor leaguers and a visiting Mexican League team. I asked Sasaki if he was worried about Ohtani’s ability to adapt to Major League Baseball, and he smiled and said, “Ohtani must go down before he comes up.” Of course, Ohtani went on to pitch and hit his way to the American League Rookie of the Year in 2018, and last week, when I reminded Sasaki of his sage words, he said, “I know Ohtani. He has a remarkable ability to give himself a software update.”

Sasaki is at the forefront of a generational shift that extends beyond baseball and into the Japanese culture itself. In the United States, baseball’s status as our resident game-of-failure imbues it with a tinge of nihilism, but young players aren’t burdened by the broader social expectations faced by those who compete for Koshien. Last spring, Sasaki brought his team to his town’s sister city, Hot Springs, Arkansas, and he came away with a typically deep observation. “In Japan, the ballpark is considered like a dojo — a martial-arts arena — and in the U.S. it is of course called a park,” he says. “I think there is room to incorporate more things from the U.S. while keeping the core of what’s good about Japan.”

One Japanese tradition calls for high school players to shave their heads. It’s considered a sign of solidarity, a communal act of anti-individualism that bonds teammates and evokes the innocence and virtue that Japanese fans have come to expect. At the end of the documentary, Sasaki, whose remarkable success as a coach — 10 Koshien appearances — has allowed him to become a trailblazer in Japanese baseball, gathers his team to tell them he is discontinuing the practice. It is nearly unprecedented, and his players, arranged symmetrically before him, don’t seem to fully comprehend what they’re hearing.

“I asked myself, ‘Why are we doing this?'” Sasaki told me. “To win, why do we need shaved heads? I couldn’t answer that question, so that’s why I made the change. At first, a lot of people didn’t accept it. I received a lot of complaints and criticisms, especially from the older generation that has a certain vision of how a high school baseball player should look.”

As a sign of Sasaki’s influence, coaches throughout the country followed his lead, including Mizutani, who made the decision before the abbreviated 2020 season. Judging solely by the documentary, it would have seemed inconceivable that this “stubborn man of the 20th century” could make such a concession.

Sasaki’s son, Rintaro, is entering high school this year. The equivalent of an American 10th-grader, he is a big, powerful hitter who projects to be one of the country’s top players by the time he finishes high school. Sasaki had to answer a difficult question: Should he adhere to Japanese tradition and send Rintaro off to study and pursue his baseball career away from his family, perhaps under the tutelage of his father’s mentor Mizutani — whose son, Kosho, is being heavily scouted by the Japanese professional teams after working with Sasaki? Or keep him at Hanamaki High and face the scrutiny and potential charges of favoritism that could come with coaching his own son?

Sasaki has decided, he tells me, to keep his son home. He will coach him as he does every other player. He will push and challenge. He will make sure his son respects tradition as he prepares for the future.